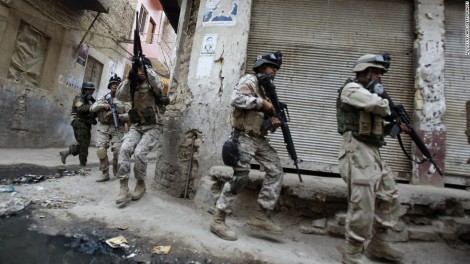 In order for the United States and its allies to successfully fight terrorism, they must do the hard work of non violent counter terrorism. Non violence does not mean Gandhian principles, but, rather, a locally driven push towards non-discriminatory and fair governance for the Middle Eastern people.

Between 2001 and 2014 approximately 110,000 civilians have been killed in the wars in Iraq and Afghanistan. Both conflicts were bloodbaths — both for those in uniform, and those caught in the crossfire.

In a perfect world, the United State’s counter-terror efforts would be systematic, in the interest of the Middle Eastern people, and devoid of civilian casualties.

In reality, our response to terror has been an unending humanitarian disaster. The United States’ fight against terror cannot be militaristic, and limiting civilian casualties is not sufficient — we must strive for zero noncombatant fatalities.

After September 11th, 2001 there was no question — America was going to war. The ensuing response to the deadliest attacks on US soil since Pearl Harbor was a catastrophic failure of the Bush administration; a failure that only appeased immediate emotion, but failed to address the roots of the issue.

The Obama administration, pledging to end our Middle Eastern conflicts, brought new hope — but soon, countless drone strikes responsible for hundreds of civilian casualties further deepened the divide between the West and the Middle East.

Both Presidents Bush and Obama exacerbated violent extremism in our foreign policy. We can expect no better from President Trump who claimed, during his campaign, that he would “bomb the shit out of [Iraqi and Syrian oil fields].”

Muslim fundamentalists try to convince others that the West is apathetic, deceitful, and full of malice. However, the truth is that when we destroyed water treatment plants in the Gulf war, or wiped out nearly forty innocent Pakistanis with a single drone strike in 2009, the United States perpetuates a narrative that fuels extremism.

The consequences of our current Middle Eastern policy — namely civilian casualties and demolished infrastructure — play into the hands of terror organizations who need violence to confirm their narrative and strengthen their rhetoric.

There’s a more personal effect as well. The loss of infrastructure, a mentor, or a loved one inspires hate, humiliation, and sadness — all emotions that can make a young man look to a terrorist cell for perceived kinship. Hence, the value of eliminating a single terrorist cell is rendered moot if the cost is a single civilian casualty or vital piece of infrastructure.

America’s vision, that it creates pragmatic, and sensitive, Middle eastern policy is in direct conflict with a drone strike that destroys a school and kills teachers, mothers, and fathers in a botched attempt to eliminate a terrorist cell.

Even if we disregard the fact that terrorist organizations have shown a remarkable ability to regenerate in the face of peril, each civilian casualty lends ISIS and similar terror groups unacceptable credibility.

Violence begets more violence–as reported by the New York Times nearly two hundred innocent civilians in Mosul were needlessly killed by an American airstrike. The United States, along with its allies, must go back to the drawing board.

Governmental systems such as Syria, Afghanistan, Iraq, and Yemen have been extraordinarily unstable — in part because of our actions in the region — and terror organizations have seized upon the lack of secure and stable government to gain territory, resources, and political power.

In order to best fight radicalization, the Unites States must move away from violence, and instead utilize locally trusted political actors committed to quality governance to support a shift towards more effective Middle East governance.

Instead of forcing the goals of American politicians and citizens upon local populations we must listen to community solutions, and utilize the resources of our nation to support their plans and guarantee their security. As David Alpher, a PhD in conflict resolution, writes, “people living in violent contexts will only buy into peace efforts that serve their needs.”

Providing a sense of ownership through community engagement will inspire a sense of purpose, and positively impact our strategy because culture will be accounted for by those who understand it best.

Finally, the positive presence of Americans who are are trusted by community leaders will directly undermine the image of a deceitful America that terrorists desperately rely on for recruitment.

Middle Eastern governments founded on religious freedom, civil rights, and economic stability are by no means easily constructed. But we must learn to be patient. Our various rushes to action since the end of World War II have often just fanned the flames of conflict.

Although any action to counter terrorism will likely involve the military, it is time that the United States stops contributing to the destabilization of fragile Middle Eastern regimes, and focuses its resources on the nonviolent solution of governmental restructuring that provides education, employment, and security — thus facilitating a meaningful future for the Middle East.