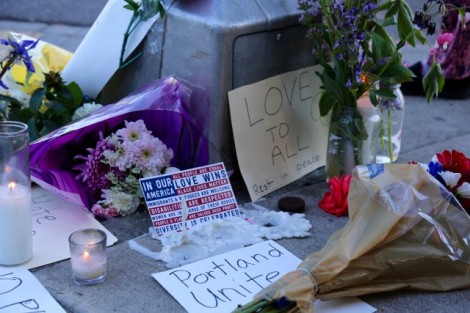 In the aftermath of a brutal and horrifying double murder in Portland on Friday, the public is grieving and grappling with the implications of such senseless violence.

The alleged killer, 35-year-old Jeremy Christian, was driven by xenophobia and white supremacy to murder two men — and seriously injure a third — who stood up to Christian’s harassment of two young women, one of whom was wearing a hijab, on a public train.

Christian did not attack the men, who were white, for their own skin color; rather, he killed them for defending the two women who were the subjects of his racist verbal assault.

For those in the Portland community, and elsewhere in the country and world, this is a difficult event to process. Some have expressed surprise that a racially motivated murder could take place in a liberal center like Portland. Others find their worldview challenged by the idea that white supremacy continues to prosper in supposed progressive strongholds across the country.

In an attempt to rationalize the irrational, many have pointed to Christian’s mental health as a possible motivating factor in the murders. As the facts of the case have become clearer, many have rushed to identify Christian as mentally ill.

In reality, mental illness is a clinical diagnosis which may or may not actually apply to Christian. However, it is increasingly apparent that Christian is mentally unstable, as those who are relatively close to him have observed.

If we are to learn one thing from this sickening event, it must be this: Christian killed two men on a train in Portland not because he is mentally unstable, but because he is racist. Christian is a self-identified nihilist and white nationalist who supports the conversion of Cascadia into a white homeland. His Facebook page features anti-Semitic, pro-Nazi memes.

Christian’s twisted and violent behavior could make the distinction between his racism and his mental instability appear irrelevant or even semantic. But it was his bigotry and hatred which he made no attempt to disguise that pushed him to kill.

It is vital to separate these two parts of Christian’s identity in order to truly understand his actions. A person can be both mentally ill and racist, but those two things are not one and the same and should not be considered as such.

Mental illness does not in itself create bigotry or provoke hateful acts of violence. It can do no more than, in some cases, compound upon an individual’s existing biases or dangerous tendencies.

The danger of conflating racism with mental illness is significant. Racism is a system of power and privilege that serves to socially elevate white people and oppress everybody else. Mental illness is a hugely stigmatized experience for individuals who are often misunderstood and dismissed by a society that struggles to address invisible disabilities.

Offering mental illness as a justification for Christian’s inhumanity only serves to exacerbate existing issues with how we address both systemic racism and mental health as a society. It extends the misleading “bad apple” justification to people like Christian who threaten marginalized communities. It further stigmatizes mental illness.

If our understanding of this double murder is that Christian was a lone wolf whose mental illness brought white supremacist terrorism to an otherwise inclusive and welcoming city, then we have not properly interpreted the implications of this event.

The truth is that the vicious cycle of racism in Portland — tacitly endorsed by both the public and the State — killed those men on the train.

Christian, after all, is a known white supremacist. He was observed — by police — giving the Nazi salute and using the n-word in a derogatory and threatening way at a pro-Trump rally in April — the same rally during which the City of Portland transported demonstrators, many of whom were unabashed white supremacists, for free on a public bus.

Christian was not detained by police in April, despite his concerning and aggressive behavior, because police deemed him to be mentally ill. He was also not rejected and ostracized by the alt right community in Portland, although members of that community have expressed discomfort with his actions.

In short, his openly racist and xenophobic ideology was allowed not only to survive, but to thrive.

It feels much safer, particularly to those who like to think of Portland as a liberal utopia, to pin the responsibility for the murders on Christian’s mental health. That way, the city’s ugly, frightening underbelly of racism and white supremacy can escape confrontation. That’s certainly what the police did in April, and it’s what many people are doing now. However, that narrative must be rejected.

Racism is not a mental illness. It is a powerful, visceral, destructive force that has evolved over time to take whatever form is most socially palatable to the ruling class in this country. Today, that form is highly refined and often less visible than it has been in past eras — coded language and racist dog whistles are the new tools of white supremacists who are now no less vicious than they were under Jim Crow.

The brutal double murder in Portland should be easy to label as racially-motivated violence. Christian is an open white nationalist who was spurred into action by his xenophobia. It is not productive nor healthy, then, to entertain the theory that the primary motivating factor in the murders was Christian’s mental instability.

Let’s call this for what it is, and begin to take steps towards addressing two issues — the stigmatization of mental health and the intentional ignorance of systemic racism, in Portland and elsewhere — that have long outstayed their welcome.

Dylan Skinner contributed to this article.