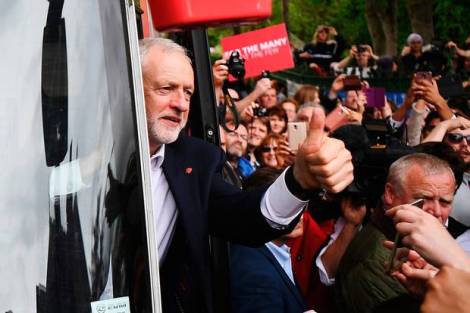 When Theresa May called for a general election in April — despite adamantly ruling out such an event early in her tenure as prime minister — the public was promised a thorough debate on how the U.K. government should plan and approach its Brexit negotiations.

We have had nothing of the sort.

Instead, our public sphere has been dominated by May’s soundbites and vague promises that demand individuals support her and her party with blind faith — and without any inclination to the degree in which we are leaving the European Union.

Will we stay in the single market? Is it possible to maintain free trade with the E.U.? Will there be a hard border between Northern Ireland and the Republic of Ireland?

Throughout the campaign, May’s answers to the simplest questions have been so vague that journalists have struggled to find anything of substance. One reporter called his interview with the prime minister “three minutes of nothing.”

The Labour Party has had little to say much either. Labour has refused to debate the Conservatives on which candidate would be the ‘strongest’ leader to negotiate with the E.U., and instead focused its campaign on domestic issues — putting its left-wing Bernie Sanders-esque party leader, Jeremy Corbyn, in a more positive light.

Corbyn has not engaged on Brexit. He has, however, put forward a series of new, innovative policies — such as a public-owned national investment bank — that give the country hope moving forward when it finally exits the European Union in 2019.

It’s a catch-22: May does not want to talk about how she will get the best deal for a ‘stronger, global Britain’ — the best deal, of course, the one where we remain in the E.U., is off the table — while Corbyn has shied away from the issue entirely.

Yet the divisions in the U.K. run far deeper than May and Corbyn.

An audience member started off last week’s BBC debate — which May decided to skip — by questioning whether May, apparently unable to debate, would be similarly challenged in European negotiations.

It was a valid question, but it was spun by the various participants in the debate in order to gain some sort of an advantage. The irony is that they could not even debate on the question about the importance of debating.

In actual fact, televised debates play a crucially important civic role — successfully reaching sections of the population least likely to be touched by the rest of the campaign. No one on the panel alluded to this, as it did not fit their own self-interested agendas.

There was promise at the start of a discussion about the Brexit negotiations with Labour and Tory, who — finally — enlightened the audience and viewers on the trade relationship with the E.U.

But, yet again, there was no serious discussion of how they would negotiate a new trading relationship.

Nick Clegg of the Liberal Democrats exemplifies those who refuse to believe that Brexit is inevitable. He argues that the best deal is for the U.K. to remain — and is another politician misleading members of the public from an impending reality that we have to deal with.

It was an unsettling evening. One questioner stated — with some emotion — that illiterate immigrants from his Indian-Pakistani community have “ruined” England and showed dismay at migration into the country.

The man concluded by arguing for literacy and numeracy tests to determine whether such individuals should be expelled from the country. It was staggering to witness how a son of an immigrant could have this ideology towards those in his own community.

I am ashamed that I do not know how he developed such hatred, given that we live in the same society. We are moving away from each other, through different polarized extremes, developing an inability to understand and show compassion to one another.

The program mirrored what we are seeing in the polls: unpredictability. The polls have never differed so much from each other in the run-up to the election, mainly because pollsters are all using vastly different voter turnout models and assumptions.

Some polls have shown Labour, down some 20 points in April, narrowly ahead. ElectionWatch UK thinks they will lose by double digits. Essentially, no one knows to what extent Corbyn has galvanized younger people to get out and vote. Only time will tell.

This election — strange even at its inception — has been a collective experience of unprecedented uncertainty. We are all shooting in the dark with our opinions, our predictions and — most scarily — our votes.