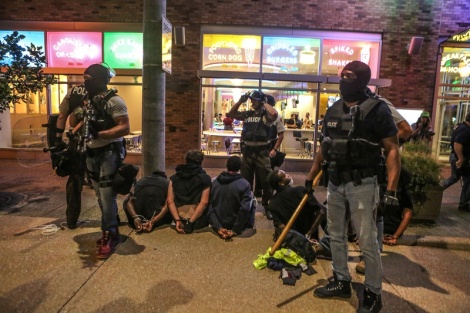 On December 20, 2011, a St. Louis policeman named Jason Stockley and his partner took off in pursuit of a 24-year-old black man named Anthony Lamar Smith, who, they suspected, was fleeing the scene of a drug deal at a Church’s Chicken in north St. Louis.

The car chase lasted three minutes. Before the police car ran down Smith’s vehicle, Stockley was heard saying that he was “Going to kill this motherf—er don’t you know it.”

He did. And then, on September 15, he was acquitted for it.

Protests erupted, and on the night of the 18th, a demonstration in the city’s downtown turned violent when some in the crowd began smashing windows and throwing projectiles.

In response, police made some 80 arrests — and, in the process, began chanting “Who’s Streets? Our Streets!”

St. Louis is a majority-minority city, but its police force is nearly two-thirds white. A group of police officers chanting “Who’s Streets? Our Streets!” can only mean one thing.

The greater St. Louis area has, in many ways, been a ground zero for racial conflict in the United States since Ferguson three summers ago, and this latest chapter is indicative of a broader shift in the American zeitgeist.

White nationalism — accompanied and emboldened by an increasingly loud white identity politics — is on the rise.

In an August Public Policy Polling survey, 45 percent of Donald Trump voters said that they’d rather have Jefferson Davis as president than Barack Obama. A further 35 percent — perhaps the people you really have to wonder about — said that they couldn’t choose between the two.

Is massive income inequality a problem in America? Absolutely. A neoliberalism that dominates politics? Certainly. A climate already buckling under the weight of global warming? No question.

But once you understand that 80 percent of the people who cast a ballot for Trump last November would consider installing as president of the United States a man who fought a war against them to protect slavery, you know all you need to know about our primary fault line.

Ever since the election, political pundits have chided the Democratic Party for its embrace of “identity politics” in the last several years. Those pundits would like to see a return to broad coalitions and talk of we and us.

But they miss the point almost entirely.

Identity politics aren’t ideal, but it’s hard to make a clear-eyed argument for all of us uniting around our shared American-ness when — as the D.A.C.A. debate underlines — we’re still fighting battles about who gets to be American in the first place.

Trump knows that debate well. His ascent to the White House started in earnest with his championing of the idea that President Obama wasn’t himself an American citizen.

Identity politics are a natural refuge for minority groups who struggle to wield political power — just as historically black colleges were a refuge for black students frozen out of American higher education. Problem is, they aren’t being practiced solely by those minority groups.

White identity politics elected Trump, and, since then, whiteness has been the most powerful political ideology in the country.

That ideology was most prominent in and around the events in Charlottesville August, when Trump defended Neo-Nazis and sparked a debate on the place of Confederate monuments in 21st century America.

Those monuments are not an academic matter. They aren’t meant only to commemorate history, they’re also meant to lionize an order in which white people ruled and black people were enslaved.

That’s why you get statutes and spaces built and named for Confederates in places like Arizona and Idaho — states that weren’t admitted to the union until decades after Lee surrendered to Grant at Appomattox.

There are, we know, are millions and millions of white Americans who would not hesitate at voting for a black man rather than a traitorous white man who has been dead for 128 years. Those people are important.

But the fact is that the Democratic candidate for president has not won the white vote since 1964, and in most of those elections, it hasn’t been close. If only white people had voted last year, Trump would have beaten Clinton by more than 300 electoral votes.

The day is coming in America where white people will no longer make up a majority of the country, and as that day approaches, it’s very possible that white identity as an overt political cause will grow in popularity and in scope.

That is, of course, the hope of the white supremacists and white nationalists who invaded Charlottesville — and it was, indeed, the great victory of the Trump campaign.

“To Trump, whiteness is neither notional nor symbolic but is the very core of his power,” wrote Ta-Nehisi Coates in the October issue of The Atlantic. “In this, Trump is not singular. But whereas his forebears carried whiteness like an ancestral talisman, Trump cracked the glowing amulet open, releasing its eldritch energies.”

That Coates piece is titled “The First White President,” and in it, he notes that — while it is underwater with every other group — a majority of white people still approve of his embarrassing presidency.

White identity politics are often excused — see: economic anxiety — or obscured and confused in euphemisms and indirect language. But thanks in large part to Trump, both his campaign and his presidency, that’s no longer the case.

At this point, the primary battle in American politics is between the multiculturalists on one side and the white nationalists who oppose them on the other.

In an April Politico profile, Buchanan told Tim Alberta that he holds no animus for the immigrant families he meets near his home in Northern Virginia. “Obviously they love America,” Buchanan said. “The question is, what is it that holds us together?”

“The neocons say we’re an ideological people bound together by what Lincoln said at Gettysburg and what Jefferson wrote in the Declaration of Independence, and that’s what makes us one nation. But my tradition of conservatism says it’s not; it’s the idea of culture and faith and belief and history and heroes and holidays.”

“Can you have a nation that consists of all the people in the world — and be one people?”

That is the great American question, and it has been since day one. Black people have been in this country just as long as white Europeans have, and Native Americans have been much here longer.

One line of thought says that we can be in community together, and we must be.

But Trump’s victory was a testament to white power in every direction — from the potency of a white power political platform to the capacity of white voters to install as president a man who openly carries the baton for whiteness and nothing else.

Those people are still considerable in their numbers. If we do not have a moral awakening in this country, and if enough white people band together to preserve white supremacy, then — for the foreseeable future, at least — it will be preserved.

In a PBS interview conducted more than 50 years ago, James Baldwin laid down the gauntlet. “What white people have to do,” he said, “is try to find out in their hearts why it was necessary for them to have a n—r in the first place.

“Because I am not a n—r. I’m a man. If I’m not the n—r here, and if you invented him, you the white people invented him, then you have to find out why. And the future of the country depends on that.”