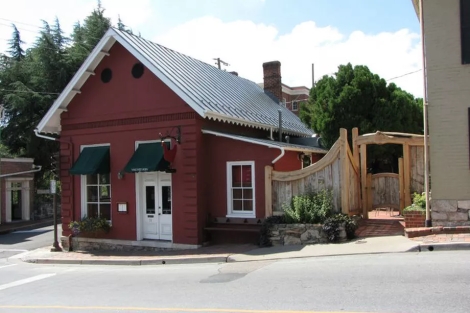 I spent the 4th of July weekend in the little Appalachian town of Lexington, Virginia.

It’s picturesque, situated just off I-64, the gorgeous stretch of interstate that runs directly through the mountains of West Virginia and southwestern Virginia. The city is dominated by red brick with white trim, as it has been for hundreds and hundreds of years.

At its busiest, when school is in session at the Virginia Military Institute and Washington and Lee University, Lexington has around 8,000 residents. During the summer, when school’s out, that number is halved.

I’ve spent a lot of time in Lexington, my mother’s hometown and father’s adopted hometown, visiting grandparents, aunts, uncles, and cousins. I have incredibly fond memories of favorite restaurants and ice cream joints, and playing football on the athletic fields at Washington and Lee.

This past visit, however, something was different. The week before I headed South, the owner of The Red Hen, a small farm-to-table restaurant in Lexington frequented by the city’s more affluent residents — those that both support sustainable farming practices and can afford a $26 steak — asked Sarah Huckabee Sanders, the White House press secretary, to leave her restaurant.

Sanders and her family were in the area for a wedding, and were eating a cheese plate when, the story goes, restaurant employees told the owner that they did not feel comfortable serving her.

The next day, Sanders tweeted about the incident from her government Twitter account. The president soon followed with a tweet from his personal account, and shortly after that, Sanders’ father Mike Huckabee, the former Governor of Arkansas and two-time Republican presidential candidate, declared on Fox News that his daughter had been chased out of the restaurant and through downtown Lexington by a mob.

It played out on cable news and in the opinion pages of the New York Times, the Washington Post, and the Wall Street Journal, as well as in the streets of Lexington — where Sanders’ ejection from the Red Hen ignited several days of protest.

Locally, the debate played out much as it did nationally. Lexington has a sharp divide between the people who live in the city and out in rural Rockbridge County, and, as in so many other places in the country, those in the city tend to have higher income and education levels than in the rest of the county.

Lexington is a dot of blue in a red sea, and the reaction there to Sanders’ statements from across the county reflected that.

I arrived in town in time to witness the “Bikers for Trump” group that spent the Saturday before the holiday standing outside the restaurant. Despite their small numbers, they still managed to leave a lasting impression, decked out in a variety of “Make America Great Again” and Confederate flag apparel.

The protestors in front of The Red Hen claimed to stand against the restaurant owner’s lack of civility. Despite that professed goal, it was easy to mistake them for a different kind of protestor when they showed up toting signs reading “L G B T – Let God Burn Them.”

The civility warriors also came bearing Confederate flags in Lexington, a town struggling to come to terms with its past. Washington and Lee is named for George Washington and, more tellingly, for Robert E. Lee — who served as president of the school after his surrender at Appomattox Courthouse, just over an hour away, ended the Civil War.

Lexington provided refuge after the war to Lee’s top lieutenant, Stonewall Jackson, who taught at VMI. Washington and Lee is in the middle of a reckoning over how to deal not only with Lee’s legacy, but also with “Jockey” John Robinson, an alum who left slaves to the school in his will nearly 200 years ago.

The civility warriors could find common ground with Robinson. Their Confederate flags glorified the days when people were bought and sold.

There is something to be said for the old maxim about “disagreeing without being disagreeable,” when it comes to legitimate debates over how large the child tax credit should be, or whether cities and localities should create more magnet schools.

But I simply cannot fathom any point in disagreeing without being disagreeable with someone who refuses to recognize the basic dignity, the humanity, of so many of us. What do we gain from doing that?

If two people of privilege sit down and have a “civil” conversation, focusing more on politeness than on one of them not believing that all people are people, the status quo isn’t challenged, doesn’t change.

I look forward to the day when I can have civil conversations with Republicans about fiscal policy. I’m happy to do that when the baby jails are closed and we have a president that doesn’t call Nazis very fine people. Until then, what’s the point of debating civility?

There should, without question, be some kind of social cost to defending and promoting the policies of the Trump administration. Ripping toddlers away from their parents as they try and claim asylum is not normal, and if Sarah Sanders and Raj Shah get to lie for and defend the president and everything goes on as normal, what’s to stop them from continuing to lie, to tear families apart?

After all, a load of very serious people writing editorials in national newspapers didn’t get the family separation policy changed. What did was, in part, Homeland Security Secretary Kirstjen Nielsen getting yelled at by activists at a Mexican restaurant.

Pressure tactics force change. People alter their behavior when they realize there is a social consequence for it.

The reason why some people get so upset when they see activists adopting concerted pressure tactics, like playing the audio of a toddler stuck inside a cage wailing for their parent outside of Nielsen’s house, is that those tactics work.

Is it really the end of the world if Secretary Nielsen gets shouted at while getting tacos? Maybe, rather than condemning the people doing the shouting, we should condemn the people who separated the families in the first place.

If Sarah Sanders and Kirstjen Nielsen really cared so much about eating in peace, they would get the kids back to their parents.