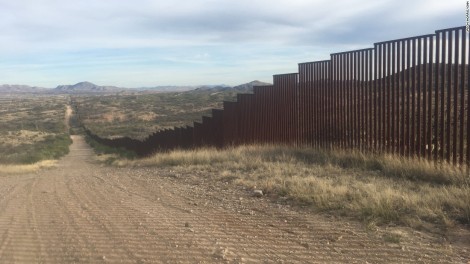 Borders are having a moment.

Donald Trump and Brexit have made sure of that. But the current, alarming trends around borders began well before voters went to the polls in the United States and United Kingdom three years ago.

In the last decade-plus, national borders as a whole have gotten exponentially more sophisticated, more militarized, and more dangerous to those who meet them.

University of Hawaii professor Reece Jones, author of the book Violent Borders: Refugees and the Right to Move, provides the data: in the 1980s and 1990s, several hundred people per year would die at borders across the globe. By 2015, that number had shot up to 5,000. In 2016, it was nearly 7,500.

In an era defined by surging nationalism and late capitalism, there has been an unmistakable emphasis on restricting the movement of people and crushing the wills of those people who move anyway.

The good news is that these trends, perhaps unsurprisingly, have been met by a resurgent activism – not just for cross-cultural tolerance and migrant rights generally, but against borders in principle.

In last year’s May Day parade in Minneapolis, then-US Representative, now-Minnesota attorney general Keith Ellison wore a t-shirt with the words “Yo no creo en fronteras,” or, “I do not believe in borders.”

Few politicians as prominent as Ellison gone that far in the U.S., but Jean-Claude Juncker, the Luxembourgish president of the European Commission, has called borders “the worst invention ever made by politicians.”

Juncker’s claim, which came at a conference in Austria in 2016, is absolutely correct in at least this: borders are a political invention. We have not had national borders – or even national identities – for a long period of time.

The modern concept of national borders dates back to the 1600s in Europe, after which the Europeans, in Jones’ words, “colonize[d] the rest of the world, chang[ing] the political systems there to match their system of borders, territory, and sovereignty.”

A number of the national borders in Africa were drawn and adopted in Berlin and elsewhere towards the end of the nineteenth century, as colonial powers divvied up the continent for the purpose of its exploitation. South America is a similar story.

Around 100 years ago, we got the modern passport. Borders broke down, changed, and solidified around both of the World Wars, and have been more or less protected since by the United Nations and other international organizations.

These are relatively recent developments. National borders are not natural.

Quite the contrary, in fact. Free movement is among the most fundamental, rudimentary human rights. Any infringement upon that right should, therefore, be considered only with the utmost scrutiny.

Do borders hold up to that scrutiny? If the entire population of Mexico were to pack their things, pile into their vehicles, and drive into the U.S. tomorrow, are there any grounds on which anyone who respects human rights could be justified in trying to stop them?

Human rights are universal. They do not apply only when you are in your native country.

In today’s world, however, that is what we experience all too often: a person’s ability to move freely is largely determined by the country that they were born in and the parents they were born to.

Of course, most people are not inclined to leave their homes unless they have tremendously compelling reasons to do so. But people, as we know, have those reasons. They are fleeing natural disasters, war and poverty, oppression and persecution.

As any country that has seen an influx of refugees and asylum seekers can attest, borders cannot stop that movement. What they can do instead is curb legal immigration, a completely different matter, and inflict the violence that their very presence promises.

That last point might be the most important. Globalization, as we commonly understand it, refers only to capital. Money moves freely around the world everyday, in huge quantities, with the economies of different nation-states intricately interconnected.

But people are not allowed to move and work freely around the world. They are, by and large, forced to live and work where they were born – even if their bosses ship their jobs overseas, deny them healthcare coverage, or fail to pay them a living wage.

The labor force is, in the mane, trapped. People who move anyway are often even more susceptible to exploitation from their employers, whose satisfaction all too often affects their legal status.

For wealthy people, for capitalists and corporations, this system works a charm. For regular people, it makes no sense.

This is true even from a neoliberal prospective. Bryan Caplan, an economist at George Mason University, has written that “the upside of open borders would be the rapid elimination of absolute poverty on earth.”

Indeed, The Atlantic estimated that “if the developed world were to take in enough immigrants to enlarge its labor force by a mere one percent… the additional economic value created would be worth more to the migrants than all of the world’s official foreign aid combined.”

There are other, class-based reasons why open borders would likely aid working people. But whatever the economics, it should be agreed that the arbitrary and uneven restriction of the free movement of people is wrong.

In all likelihood, national borders going to be put under immense pressure in the coming generations by climate-induced mass migration. It is only a matter of time before they fall.

The only lasting borders, if we take care, will be geographic – mountains and oceans, fields and forests. In and around those natural barriers, human beings, just like all other animals, should be free to roam.