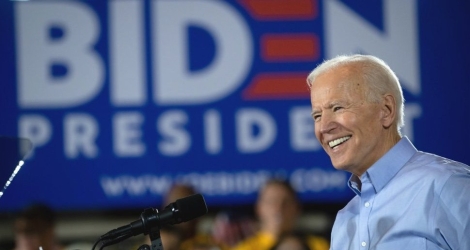 Democratic primary voters, at this point, seem to like Joe Biden for their party’s 2020 presidential nomination.

The former vice president, who launched his third bid for the White House two weeks ago, has led in all but two of the national Democratic primary polls conducted since last October.

In those polls, Biden has led the field by an average of 18 points. In the first two surveys conducted after his launch, by CNN and Quinnipiac respectively, he stretched his lead out to 24 and 26 points.

He is, unquestionably, the frontrunner. Besides the polls, Biden has strong institutional support in the party, he raised more money than any other candidate did on the first day of their campaign, and he scores very well on an important issue: electability.

Democratic voters want a candidate who can beat Donald Trump. They seem to feel that Biden, a direct link to the Obama era and a throwback to an era of American politics that looked and felt much different than the current one does, fits the bill.

At this point, polls back that position up. Biden consistently does better than any of his 2020 rivals do against the sitting president.

But electability, as we know, is difficult to predict and easy to wield against against non-white, non-male candidates. Biden has been out of politics since 2016, he has universal name recognition, and he has not been tested in a campaign of his own for more than a decade. His polling well against Trump, at this point, should come as no surprise.

Biden will continue to be a strong contender for the Democratic nomination. But he is not, by any stretch, the party’s best chance to win back the White House. There are a litany of reasons why.

Three years ago, Hillary Clinton shared many of Biden’s weaknesses. She voted for the War in Iraq, she was vocal in her support of the 1994 crime bill, and she was a creature of the Washington establishment in much the same way that he is.

Biden is not in a position to do any better with those voters than she was. His record is arguably worse, his platform is equally opaque and unambitious, and, if history is any indication, he’s not nearly as effective a campaigner as she was.

Biden made his name opposing school integration. He wrote the crime bill that Clinton backed, railing on the Senate floor about how “you must take back the streets,” and about how you do that with “more cops, more prisons.”

Biden apologized for his role in passing the bill – a bill he insisted on calling the Biden-Hatch Crime Bill – in January. He cannot, however, quite manage to fully apologize for the way he treated Anita Hill as Chair of the Senate Judiciary Committee in 1991.

Biden considers Dick Chaney a chum – calling him a “decent man” at a 2015 conference and provoking a mild rebuke from an 87-year-old Walter Mondale. Think that’s bad? He eulogized Strom Thurmond as a “special man” who “truly cared for people.”

Last October, Biden gave a $200,000 paid speech to the Economic Club of Southwestern Michigan, during which he praised Republican representative Matt Upton as “one of the finest guys I’ve ever worked with.” Upton was re-elected by five points.

On foreign policy, Biden is a disaster. Just this week, he tweeted that the U.S. must “stand with… Guaidó in Venezuela,” the exact line with which the Trump administration very well might launch an invasion.

Sanders, for comparison, called the idea that the U.S. would intervene militarily in Venezuela, given our history with similar incursions, “literally unbelievable.”

Biden does not support Medicare for All. He’s doing high dollar fundraisers with Republicans. He has been accessed by several women of inappropriate behavior, and the fact that this video is eleven minutes long is deeply troubling for any number of reasons.

It continues: Biden said last year that he has “no empathy” (“give me a break!”) for millennials, and that he doesn’t “think 500 billionaires are the reason we’re in trouble,” because – as if this is in any way relevant – “rich folks are just as patriotic as poor folks.”

Most urgently of all, Biden has made abundantly clear that he considers Donald Trump to be an anomaly, a one-off threat, and not what he so obviously is: an outgrowth of some of the darkest, most powerful, deepest-rooted currents in American politics and society.

In his announcement video, Biden said nothing about any policy he wants to implement to improve American lives. He talked about Trump, and Charlottesville, and how he is the person best equipped to restore the country’s proper moral order.

This, of course, was the Clinton campaign’s strategy in the fall of 2016: focus on Trump, how repulsive Trump is, how un-American he is, and everyone, eventually, will back into voting for us.

The good news is that a vast majority of people who voted in 2016 did not believe that Trump was qualified to be president. The bad news, of course, is that it ultimately didn’t matter.

What Democrats must understand in 2020 is that focusing only on Trump, and trying to counter Trump with an “America is (or was) already great” message, is the best and perhaps only way to ensure that he is re-elected.

For many people, facing exorbitant healthcare costs, stagnant wages, crushing debt, and cities sinking into the ocean, America is not already great. For many other people, especially those people who are not white, who Democrats so badly need to show up for them in two years, there is precious little in America’s past worth returning to.

The odds that Biden can convince people otherwise seem slim. He struggled badly in his first campaign swing last weekend, using a teleprompter during his first two appearances, frequently rambling, and was decidedly light on substance.

As a speaker, he’s slowed considerably. That much is clear to most anyone who has watched him over the last several years.

Democrats from both the left and center have compelling choices in this primary. Biden is not one of them.